I walked into London’s Morgan Studio in 1973, feeling the occasional pang of anticipation, because I would be playing with Aynsley Dunbar and the great Jack Bruce. Being such a huge fan of Cream, Jack was one of my heroes, and, today, this country boy from Decatur, Illinois was going to make music with him. I should have felt intimidated, but, strangely, I didn’t. My youthful ignorance and naiveté probably kept me from turning into a pile of rubble.

Aynsley and I stayed at the same hotel, so we traveled to the studio together in a late ’50s Rolls Royce with a fine Scotsman as a driver. I loved that car, and the driver was a character straight out of Dickens. Thus began my longtime love affair with England. Not long after Aynsley and I arrived, Jack drove up in a British racing green Ferrari. It certainly sounded like it meant business.

We had our little cordial niceties, and then it was time to get down to business. I believe the first song we did was “Men of Good Fortune.” I don’t remember what amp I used, but I do remember I had the Univibe I borrowed from Steve Howe. I wrote out a quick chord chart, and when we ran the tune down for the first time, it hit me—“My God! I’m playing with Jack Bruce!” When I heard Jack’s bass through my headphones, it reminded me of all the times I had listened to Cream through headphones, and the most wonderful thing happened—instead of feeling intimidated, I felt inspired. I wanted to play all night. Remember, this was my second album project ever, and it was utter bliss.

​From An Interview With Rock Guitar Daily - Tony Conley

​"Jack and I got along really well, I loved playing with him, and I got a call about a year later from his management wanting to know if I'd be interested in working with him on a solo album, and I said, 'Absolutely!'

"He's great to work with, he's a very cool guy - we liked playing Scrabble! We played Scrabble together quite a bit. It was a lot of fun, but it wasn't fair because he's such a wordsmith, and he had his lyricist, Pete Brown with him - so they were always creaming me!

"But boy, some great music came out of that guy, he's an incredible musician."

Steve had met Jack during the recording of Lou Reed's Berlin album.

They hit it off well and Jack Bruce later asked Steve to play on Out Of The Storm.

Steve has great memories of working with Jack, Jim Gordon and Jim Keltner. He was a huge Cream fan and this was pretty much a dream come true for him.

Jack Bruce Out Of The Storm 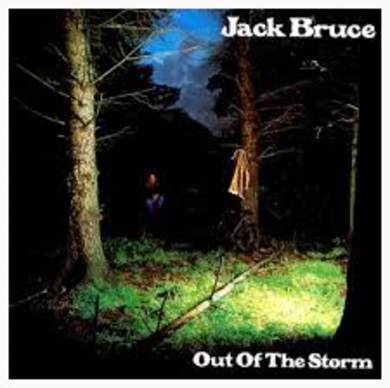