I walked into London’s Morgan Studio in 1973, feeling the occasional pang of anticipation, because I would be playing with Aynsley Dunbar and the great Jack Bruce. Being such a huge fan of Cream, Jack was one of my heroes, and, today, this country boy from Decatur, Illinois was going to make music with him. I should have felt intimidated, but, strangely, I didn’t. My youthful ignorance and naiveté probably kept me from turning into a pile of rubble.

Aynsley and I stayed at the same hotel, so we traveled to the studio together in a late ’50s Rolls Royce with a fine Scotsman as a driver. I loved that car, and the driver was a character straight out of Dickens. Thus began my longtime love affair with England. Not long after Aynsley and I arrived, Jack drove up in a British racing green Ferrari. It certainly sounded like it meant business.

We had our little cordial niceties, and then it was time to get down to business. I believe the first song we did was “Men of Good Fortune.” I don’t remember what amp I used, but I do remember I had the Univibe I borrowed from Steve Howe. I wrote out a quick chord chart, and when we ran the tune down for the first time, it hit me—“My God! I’m playing with Jack Bruce!” When I heard Jack’s bass through my headphones, it reminded me of all the times I had listened to Cream through headphones, and the most wonderful thing happened—instead of feeling intimidated, I felt inspired. I wanted to play all night. Remember, this was my second album project ever, and it was utter bliss.

I loved the way we listened to each other and played off each other. As Joe Walsh puts it—that’s when the mojo happens. And it certainly did with those guys. We also did a song called “Caroline Says II,” in which the three of us tear off in wild abandon at the end. I could have done that forever. Jack and I got on very well, and he later asked me to play on his solo record, Out of the Storm.

​I learned volumes playing with Jack and Aynsley, and I used those lessons throughout my career. I have seen many changes in the recording business—some good, some bad—but, to this day, when you put players in a room together, there is no mistaking when the mojo happens.

Lou Reed’s Berlin was an important album for me in many ways. I was working with a genius, it was only the second album I played on, it was my first trip to England (which was very exciting as I was a big fan of the ’60s British Invasion), and I got to work with Jack Bruce, Steve Winwood, Aynsley Dunbar, and B.J. Wilson. I expected to be nervous—or maybe even a little intimidated—but I was thrilled to be playing with these guys. I think this was naiveté on my part, rather than confidence. I just kept thinking what an incredible experience it would be. I also knew these guys would kick my ass and push me to a new level, or they would roll right over me. I didn’t dwell on that part so much!

We began recording at Morgan Studios in London, where Yes was also working. Bob Ezrin [Berlin’s producer] and I actually borrowed a Univibe and a Coral sitar from the very gracious and kind Steve Howe. One of the many things I learned doing Berlin was how to listen to the other musicians, and how to think on my feet at the same time.

I had flown to London from Toronto with Bob and Aynsley so I already knew Aynsley a little. But the day I met Jack Bruce for the first time was really special. He was pretty quiet at first, but definitely the consummate professional. In fact, Lou told me Jack had really impressed him when he asked to see the lyrics for the first song we were going to record. I started paying more attention to the lyrics myself after hearing about that. If you know what the song is about, it can influence and inspire how you play the song—a valuable lesson. 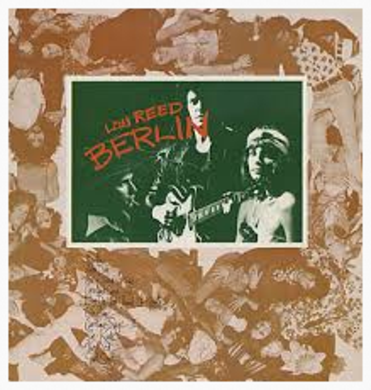 From An Interview With Gibson Guitars:

You mentioned earlier you were playing an SG when started your career with Mitch Ryder. Had you switched to a Les Paul TV Special by the time you played on Lou Reed’s Berlin album?

Actually that guitar--the SG--got stolen right when we were about to do overdubs for Berlin in New York City. It was stolen out of the Record Plant. The owner was furious about it, really angry. I took the insurance money and bought the Les Paul TV Special, a 1959, for $240. But I did use the SG for most of the basic track stuff on Berlin.

'Berlin' was Steve Hunter's second album as a session player. It was recorded in 1973 at Morgan Studios, London and  the Record Plant Studios, New York​.

One of my favorite songs on Lou Reed’s Berlin album is “Sad Song.” That entire album, in my opinion, is one of the most brilliantly written pieces of art in rock history, so it’s difficult to have a favorite song. But there is something about “Sad Song”—lyrically and musically—that really makes it genius. Playing it years later with Lou live, and with a real children’s choir singing behind me, came close to bringing me to tears many times.

As I’ve mentioned before, [producer] Bob Ezrin had this ability to hear the final completed album in his head before we even started recording. But he always allowed some wiggle room so that spontaneous things could happen when the players got in the room together. A major part of producing—especially in those days—was putting together the right musicians for the job, and Bob was (and still is) brilliant at that.

I had already put a Univibe rhythm-guitar part on “Sad Song,” and now it was time for the two solo sections. I think Bob and I had assumed the solo would be a melodic one, as opposed to a jammed or improvised one. That suited me just fine, because I always loved coming up with those kinds of solos, but I had an odd way of doing that. (Well, it was odd to me, at least.) I would play through the solo section and improvise different melodies. Then, Bob would then say something like, “Okay, we have a good beginning, but the middle and end aren’t there yet.”

So I would learn the beginning part we liked, and then go on from there. When we finally had all of the pieces we liked, I would then learn the entire solo, and play it all as one continuous and seamless piece. In the case of “Sad Song,” I doubled the first solo, but then, on the second solo, I played a harmony to the original line. I meant to play the solo harmony a third above the original, but I went to a fifth a couple of times, which seemed to work fine. You see, my music theory was pretty much non-existent back then, so I had to rely on my ears. I think that, in some cases, this had its advantages and wasn’t a bad thing.

Bob and I did lots of solos by improvising pieces, and then putting them together into a cohesive solo. Although I have increased my knowledge of music theory a bunch since those days, I still rely on my ears—which is precisely what my teacher, the late Ted Greene, always told me to do.
​

​With the release of the remastered Lou Reed Collection there has been renewed interest in 'Berlin' and it has become apparent that more credit needs to be given where credit is due regarding the players on this album.

​There were two main guitar players on 'Berlin', Steve Hunter who played all the electric plus some acoustic guitar and Gene Martynec who played a majority of the acoustic parts of which there were many.  Dick Wagner played some rhythm guitar on 'Sad Song' and also did some background vocals.