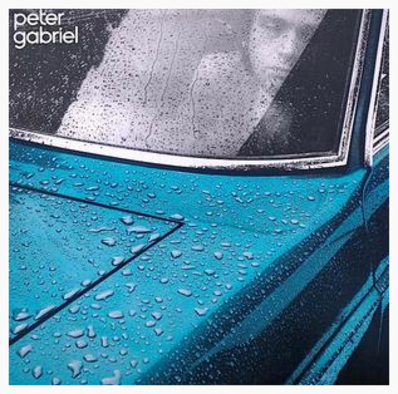 Waiting For The Big One

Peter Gabriel (Car) is the first studio album by English rock musician Peter Gabriel and the first of four with the same eponymous title. Released on 25 February 1977, it was produced by Bob Ezrin. Gabriel and Ezrin assembled a team of musicians, including Robert Fripp of King Crimson, to record the album. Upon the album's release, Gabriel began touring with a seven-piece band under his own name.

​This album is often called either Peter Gabriel 1 or Car, referring to the album cover by London artist Peter Christopherson when he was associated with the London artists group Hipgnosis. The car was a Lancia Flavia owned by Hipgnosis founder Storm Thorgerson.
The album went to No. 7 in UK and No. 38 in the USA.

A pivitol album for Peter Gabriel, Steve has only good memories of working on this record.

He recalls that the last song to be recorded was Solsbury Hill, there had been some discussion about the lyrics between Peter and Bob Ezrin and by the time the guitars were ready to be laid down Robert Fripp had left for London.

​Steve, Peter and Bob gathered around a piano as Peter showed Steve what he had in mind for the opening guitar. Bob suggested Steve try doing it in Travis Picking style. The song is mostly in 7/4 so it was a bit of a challenge for Steve, then he had to get it right three times as they tripled the part.

Many people think that part was done on a 12 String but it was not.

“I borrowed the guitar [used on the track] from an assistant engineer named Jim Frank – a really nice guy who’s no longer with us. He had this really wonderful old Martin – I don’t know if it was a D-18 or a D-28, but I played it on a few songs because it sounded great and played wonderfully.”

“The chords are more voicings than chords,” “There are chords, but I was thinking in the key of A except I used a capo on the second fret. There’s nothing outside the key at all – just the way the voicings work with the keyboards makes them sound unique. steve hunter

In 2014 Peter Gabriel gave Steve credit for coming up with the guitar parts on Solsbury Hill in a new biography by Daryl Easlea.

Very occasionally mistakes are made when the credits are done on an album. In this case the credit for the solo on Slowburn was mistakenly given to Dick Wagner when in fact the solo that was used was by Steve.

It is an unfortunate but understandable mix up.

Steve had already done all the solos from the beginning to the end of the song but Bob (Ezrin) had the idea of getting Dick in to do the end solo as a harking back to the Hunter/Wagner team. But ultimately Bob decided not to use Dicks solo and left it as Steve's.  Inadvertidly, he credited Dick for that solo.

Steve went on to do the Gabriel tour and would have known for sure if he was learning a solo that he had not created.

He did protest the incorrect credit once he saw the album sleeve and apologies were made but by that time it was too late.

​There was a heated discussion on FB between Dick and Steve on this matter and eventually Dick conceded that it was not his playing on that track.