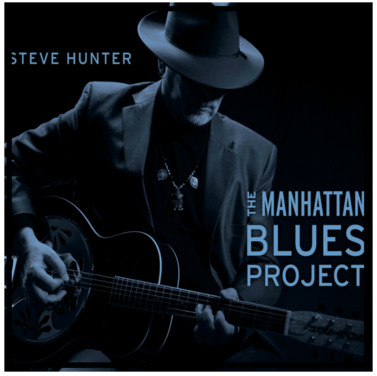 Hunter left the Alice Cooper – No More Mr. Nice Guy Tour in Jan 2012 to work on this album. He used the experience gained by his many years of studio recording under the direction of legendary producer Bob Ezrin to self produce this album. He invited some of the artists that he has met and performed with over his musical career to appear with him on the album. Jason Becker, who is afflicted with ALS and is able to communicate only with the movement of his eyes, composed "Daydream by the Hudson" with the use of computer software.
Hunter made his reputation in vintage hard rock but on this album he delves deep into his blues roots, capturing the rhythm of New York through his "Debussy style" interpretations of images of the City. He interlinks sketches, moods, grooves and full blown songs on an instrumental album subtly coloured by prepared vocal parts.

Manhattan Blues needed help from the people who pledged on the Kickstarter.

It was their contributions along with the invaluable help from Alice Cooper, Sheryl Cooper and Kyler Clarke that gave Steve and Karen the funds and the encouragement to see it through. Many other people helped along the way, Kim Makki kept up the positive vibes and Bob Ezrin was the first person to pledge.

​Doing a Kickstarter is a huge undertaking and not to be taken on lightly, there is a responsibility to the people who cared plus discipline to organizing the pledge gifts, the list of who gets what and the posting out around the world. Most importantly though, it helped Steve be encouraged to put his heart into this album. He was very moved by the support and was determined to make this album great for them.

The Guests
The first guest Hunter approached to play on the album was bass player Tony Levin. He and Levin had worked together on Peter Gabriel's first solo album and tour in 1977 Peter Gabrieland Hunter is a huge fan of Levin's playing. Tony played on two tracks of Manhattan Blues, Solsbury Hill (from that first PG album) and 'Sunset In Central Park'. Next came Joe Satriani. Satriani and Hunter had met a year earlier on a benefit show for Jason Becker. Much to Hunter's surprise, Satriani had invited him up to play on his encore and a friendship was formed. Satriani did not hesitate when asked to play on 'Twilight In Harlem' and offered up an inspired solo that blew Hunter away. Gaining courage for who he might ask next, it was decided to try the 2Cellos. Hunter had played the melody on 'Every Breath You Take', a bonus track of their 2012 album In2ition which had been produced by Bob Ezrin. With Ezrin's help the 2Cellos were contacted and to Hunters joy they said yes. They play hauntingly beautiful Cello over the outro of 'Sunset In Central Park' which also happens to be the final track on the album.

Meanwhile, as Tony Levin had been brought on board, Hunter decided to track down his old keyboard buddy from that same 77 Gabriel tour and so Grammy Nominated Phil Aaberg also contributed. Hunter met Johnny Depp in London in 2011 when, as part of the Alice Cooper No More Mr. Nice Guy Tour they had stopped in the city for a one off show at The 100 Club where Depp sat in on guitar during the set. With the help of Tommy Henriksen (Alice Cooper) who also contributed some rap vocal to the album,

Depp was asked and he said yes. Steve pretty much wrote 'The Brooklyn Shuffle' specifically with Depp in mind and then throwing caution to the wind he decided to ask Joe Perry of Aerosmith about doing a solo on the same song. Back in 1974 Hunter had played the opening solo of Train Kept A-Rollin' and it seemed somehow fitting that 40 years later Perry would put a solo on Hunters album. Depp and Perry are also good friends, so that sealed it. They both played solos on 'The Brooklyn Shuffle'.

Hunter had initially asked Steve Vai to play the second solo on 'Twilight In Harlem' , they had known each other for many years. But Vai was in the middle of a major project with an imminent deadline and did not have the time. Hunter asked Jason Becker who he would suggest to fill that spot after the Satriani solo. Jason immediately said Marty Friedman who had been the other half of the band Cacophony. Hunter did not know Friedman who lives in Japan but after an introduction though Becker, Marty said yes and sent over a stunning second solo for that track.

It is fairly well known that Hunter and Jason Becker are close friends, they met whilst recording the David Lee Roth album A Little Ain't Enough. In 2012 Hunter had asked Jason if he had any compositions he could add guitar to for his new album and Becker sent over a beautiful programmed piece that eventually became Daydream by the Hudson.

Critical Reception
Glenn Astarita in All About Jazz says "each track on this enjoyable album casts an alternating vibe via Hunter's deft acoustic and electric work, conveying great sensitivity while reaffirming his stature as one of the best in the business".

In his review for Classic Rock Revisited, Jeb Wright notes; "This album is Steve Hunter's masterpiece and if one is not careful, one will find this album quietly creeping its way back onto your playlist, time and time again. One of the most poignant moments on the album is the tune "Daydream by the Hudson" written and programmed by guitar virtuoso and Lou Gehrig disease victim Jason Becker. This collaboration brings the album to a new level of virtuosity."

Daydream By The Hudson (programming by Jason Becker)

Steve Explains About The Album

Prelude To The Blues
Steve Hunter

A Night At The Waldorf
Piano – Philip Aaberg

Daydream By The Hudson
Composer And Programmer – Jason Becker

Sampler For The Album