The Aerosmith version of 'Train Kept A Rollin' has been given many accolades over the years, it is featured in the Aerosmith 'Guitar Hero' video game and Steve's opening solo has been transcribed and analyzed many times.

​​Get Your Wings is the second studio album by American rock band Aerosmith, released March 1, 1974. The album is the first to feature production from Jack Douglas, who would go on to produce the band's next four albums. Three singles were released from the album, but none of them made the pop charts.

The album has been released in stereo and quadraphonic, and certified triple platinum by the RIAA.

Steve Hunter only played guitar on one track of 'Get Your Wings' which was  'Train Kept A Rollin' written by Tiny Bradshaw, Lois Mann and Howard Kaybut.

The radio stations picked it up and helped elevate that album into Rock History.

Steve's part in this came about almost by accident, whilst he was taking break during the recording of a different album. He was out in the lobby when Jack Douglas spotted him and asked him if he would like to do a solo for him.

After checking in with Bob Ezrin who was producing the other album, Steve joined Aerosmith in the studio. They were all there and the atmosphere was good as far as Steve can remember.

He set up his Gibson TV Special through an old Fender Tweed Twin and Jack ran down the track, Steve played through it. When it was done Jack asked him to run it through again as he had played over the vocal. The vocal had not been in Steve's headphones, so on the second run through he could hear Steven Tyler singing.

At the end of the second take, Jack said 'That's great, thanks" and it was done even though Steve always felt he was still feeling his way through the chord changes.

​There has been a lot of discussion on the why's and wherefores of Steve been asked to do that solo. Certainly the band were all very nice to him that day and he could feel no discord. He assumes that Jack had something in mind for the solo and when he saw Steve in the lobby he thought he could get that something for him.

​As it turned out, unbeknownst to Steve, his colleague Dick Wagner had already played a solo on the second half, but they were not in the studio at the same time.​​

As with many albums back in the 70's, as a session player Steve was not given credit for his solo on 'Train Kept A Rollin' which meant that his contribution could not be officially recognized. But in 2014, Steve's wife Karen Hunter was able to get the evidence needed to register Steve as the guitar player on that track with a society in London, England called PPL. PPL collects performance royalties for sidemen on recordings that get airplay of any description.  They collect from many countries around the World.

Karen was able to get signed statements from Jack Douglas, (the late) Ray Colcord and Bob Ezrin as the evidence needed, who were all very happy to help.

An Article in Guitar Player Magazine About The Process:

Steve Hunter is well-known for cutting the thrilling solos that energized scores of classic-rock hits. But just like legions of "officially" anonymous and uncredited session musicians who helped birth decades of chartbusters, Hunter was not cut in on the airtime performance royalties for many of those songs.

To right that situation, Hunter's wife Karen embarked on an administrative quest for which she showed as much tenacity and grit as one of her husband's ferocious guitar solos.

Now, thanks to her efforts, Steve Hunter will start receiving royalties for his contributions to Aerosmith's "Train Kept A-Rollin'" in 1974, and Alice Cooper's "Billion Dollar Babies," "Hello Hooray," "Raped and Freezin'," "Unfinished Sweet," "Generation Landslide," and "Sick Things" in 1973. In some countries, those royalty payments will be backdated up to ten years — perhaps a small victory compared to the more than 40 years Hunter has missed out on performance revenue, but certainly a major triumph for the guitarist's reputation, official legacy, and future earnings.

"A London-based performance-rights society, PPL, collects and distributes money for the use of recorded music on behalf of record companies and performers," says Karen Hunter. "There are many countries around the world that participate in this collection process."

Using session musicians was a common practice in the 1960s and '70s, so there are no real bad guys here — that is, unless you count the United States of America, which, according to Karen Hunter, does not participate in the PPL collections.

"If your performance as a session musician is played on the radio or TV across the world, there should be a performance royalty due to you as a non-featured artist," explains Karen Hunter. "In order to make any claims, you need to get an account with PPL, and then learn how to navigate the claims process. Once you enter the name of an artist you have worked with, a search will find any tracks that are applicable, and, even then, some of them will be no longer claimable. Steve has played on quite a lot of records, so my first job was to search and claim all the tracks that he was given credit for on the album covers. For every record I located that remained currently claimable, I photographed the album cover and the musician credits, and then uploaded the evidence for each individual track.

"The challenge really started when it came to tracks Steve had played on that he did not get a visible credit for. In order for PPL to find these royalties for you, they need evidence that you actually played on the record. In Steve’s case, even though it is fairly common knowledge that he had played the opening solos on "Train Kept A-Rollin'" and the solos on several Billion Dollar Babies tracks, I needed to get signed statements of corroboration from someone who was involved with the recording. In this case, it was Bob Ezrin, who produced Alice Cooper's Billion Dollar Babies, and Jack Douglas and Ray Colcord, who produced Aerosmith's Get Your Wings (on which "Train Kept A-Rollin'" appeared). They all took the time to help Steve, and, eventually, I had all the relevant statements to put in as evidence. It remains to be seen what will be paid out, but any performance royalties are welcome at a time when Steve needs it most, as he is going blind with Pigmentary Glaucoma, and touring is now impossible without assistance." 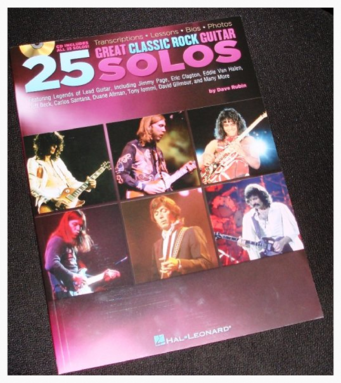 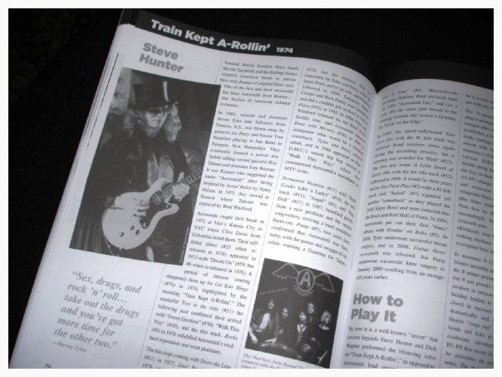 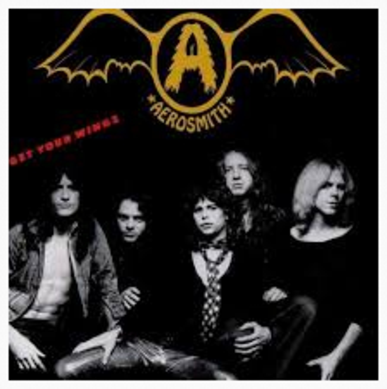 "Aerosmith was in Studio C, and I was doing work with [producer] Bob Ezrin in Studio A," recalled Steve Hunter. "I had a long wait between dubs, and I was waiting in the lobby. Jack popped his head out of Studio C, and asked 'Hey, do you feel like playing?' I said, 'Sure,' and I grabbed my guitar and went in. I had two run-throughs, and then Jack said, 'Great—that's it!' That turned out to be the opening solo on 'Train Kept A Rollin'."   steve hunter 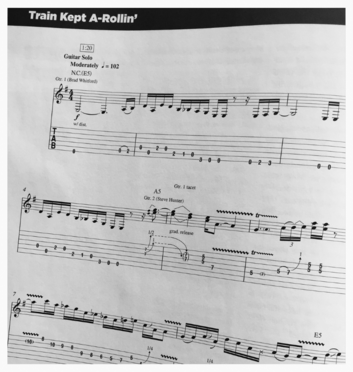